When Emily Soloby applied to Factory45 in 2018 she had an idea for a sleek, comfortable, all-weather boot for professional women.

As the co-owner of a transportation safety company that she runs with her husband, Emily would often have to run from client meetings to the job site and couldn’t find boots that had the protection she needed, while also looking good with what she was wearing.

I remember reading Emily’s Factory45 application and thinking, now there’s a woman I want to work with. 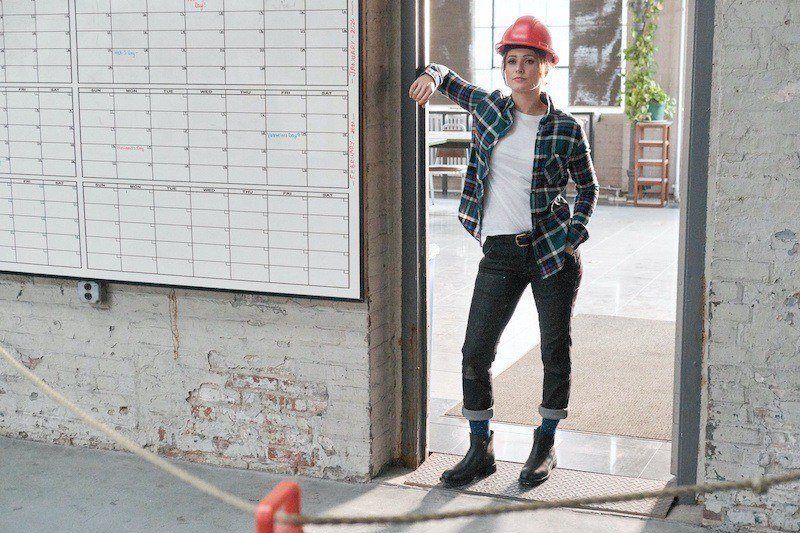 One of the first things we tackled at the start of Factory45 was market testing.

Before joining the program, Emily thought she needed to focus on a more generalized boot to appeal to a larger customer base.

But then she began conducting focus groups and surveys and discovered that it wasn’t just women in the transportation industry who needed stylish safety boots — it was women in STEM, architecture, engineering, construction, and many more industries.

“It was a much bigger market than I thought,” she told me in an interview for this story. So she quickly pivoted back to her original idea to create stylish women’s safety boots.

“It was the best decision I could have made, because now we are not just putting yet another fashion boot out there,” said Emily. “We are filling in a true market need, and helping women to feel seen and acknowledged in their industries.”

From the start of Factory45, Emily followed the program to a tee.

I can go back and look at emails we sent during office hours and recognize not only her acute attention to detail but also her patience in building the business the right way, from the start.

“We began testing out materials by having companies send us samples, and we traveled to leather suppliers to see their facilities and understand their process,” Emily told me. “We visited materials shows, and spoke to as many people as we could, to try to better understand the safety shoe sourcing process.”

She visited over a dozen factories and eventually found one in Mexico near the world-class Gold-rated tannery where she sources the leather for her boots.

Emily says, “One of the most important things to us was that we source our leather close to where the shoes are being made, because this saves on the resources typically involved in shipping and transport.”

She spent over a year building a community, social media presence, brand identity and email list, while simultaneously working on her supply chain.

Then in February 2019, Juno Jones launched to the world through pre-orders on Kickstarter and reached its goal in 29 hours.

With over two weeks left in the campaign, Juno Jones has more than doubled its goal with over $20,000 raised.

So, what were the three most important marketing strategies that Emily attributes to the success of Juno Jones’ launch?

To keep up momentum, Emily says she is following up on all of the press leads, writing articles, and doing lots of podcast interviews. What I personally love about the Juno Jones brand and Kickstarter campaign is that it appeals to a niche market.

There is no question that a women’s safety boot is more interesting as a brand story and product offering than a generic boot. When the right customer discovers Juno Jones, she immediately knows it was made for her.

And that’s incredibly compelling in a business debut.

So what’s next for Juno Jones?

Emily says, “Our mission is to provide women with beautiful safety boots, and in doing so, to empower and normalize women working in nontraditional fields. Often times, in male-dominated fields, women can feel invisible, isolated, and like their voice isn’t heard. By creating safety footwear especially for women, we want them to feel seen, acknowledged, and empowered to rise to the top of their industries.”

Know a woman in STEM who would love a stylish pair of safety boots?  Send them this link to pre-order from Juno Jones. Fabric Sourcing: How to Negotiate High Minimums
Scroll to top